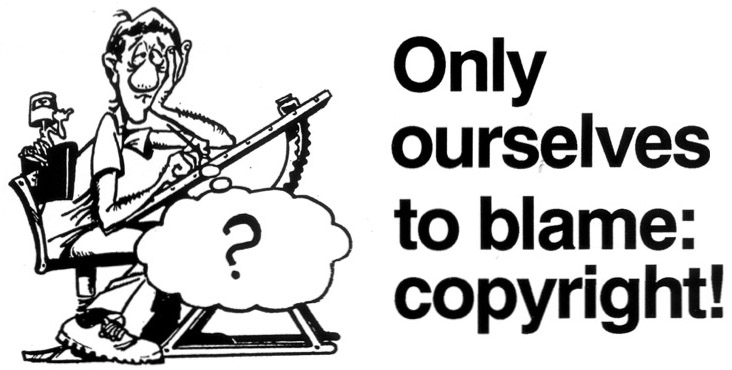 This is an excerpt from a past issue of InkSpot, the ACA’s quarterly magazine. To read current InkSpots, you’ll need to get a copy by joining the ACA, either as an Associate or Full Member.

Few artists have the time, inclination or the knowhow when it comes to legally protecting their creative output. In this Inkspot article from 1991, COLE BUCHANAN explains why and how to make the effort.

Getting ripped off has become almost an occupational hazard with cartoonists. It’s part of the vicious cycle which maintains that cartoonists are held in low esteem because one can so easily pinch their work, therefore it can’t be worth much, which is why they field in low esteem.

My introduction to the National Committee of the Australian Black & White Artists’ Club was as a guest. I watched a very senior committee member rant violently and at length about the publication of a number of his cartoons in an expensive sports diary. No-one had contacted him, he said, publication was without his permission and they were making money while he was not. Asked if he wanted to put his complaint as some sort of motion, he declined, muttering that he just wanted to let someone know about it!

The first time our works are pirated the instinct is to sound off just like our outraged committee member, even if few of us have access to such a distinguished audience. Thereafter, most of us shrug our shoulders and cop it sweet. After all, there is nothing you can da about it, is there?

Fellow members, there is plenty you can do. Furthermore, until black and white artists start doing it, they will never receive the respect to which their talent entitles them.

The ‘Don’t Get Mad, Get Even’ approach.

A few months back I came across a magazine issued by a major oil company to franchisees of its roadhouses. When I say I came across it, I saw a corner of an illustration poking out under a pile of rnags on the editor’s desk of a journal I work for. It seemed to me that I recognised the way the feet were drawn.

Looking closer, I was not only able to recognise the illustration as my own, but I remembered where I had sold them. The article in the roadhouse magazine was on hygiene, and the original drawings were three of fifteen illustrations commissioned by the State health authority for a booklet some two years earlier.

The magazine publisher no doubt had assumed that as the brochure was issued free as a public information service, this made anything within it free and fair game too. He was about to learn an expensive lesson in copyright law.

The fact that the health authority had commissioned and paid for the illustrations does not mean that they own them. If they want to re-issue them in another form, as a t-shirt for example, or even in an internal report on health promotional materials, they need to negotiate with the artist to establish a fee for ‘second rights’,

In fact, the publisher does not purchase the art at all. If you want your drawings back to sell or to hang an the well, you have the right to demand them. What you offer a publisher is the limited publication rights of your work, for a specific purpose.

While this right is enshrined in Common Law, it is as well to let the publisher know you are aware of it. Your invoice should read ‘To first Australasian publication rights to (describe work) for use in (book, poster, report or whatever.) You can be sure that any buyer who objects to this form of billing is planning to ‘get his money’s worth’ out of your work. And that means putting it to uses you never negotiated for.

Of course, there are occasions when you will sell ongoing rights; for example, if you produce a caricature of personality who appears frequently in a publication. This costs extra, and you are wise to limit the time period to say, twelve months, to be re-negotiated next year.

But back to the Case of the Purlioned Public Health Pix. The first thing that I had to do was find the right solicitor. Just as a caricature specialist would not be the right person to approach for a gag or an adventure strip, copyright is no job for the bloke who handled the conveyancing on your house, or got you decently divorced.

Fortunately the solicitor found me. I attended a AB&WAC meeting on copyright late last year and met Shane Simpson. Shane runs a practice in Sydney specialising in representing creative folk in copyright matters. We learned how he had achieved justice for a group of stills photographers against the combined Hollywood moguls, and won the day for a British heraldic artist opposing the might of the Prince of Wales Trust. He seemed just the man to represent me against a trade magazine with a circulation of a few hundred.

Back and forth went the letters between solicitors, and to cut a long story short, a couple of months later the publishers settled. There was never any question of not paying up, the negotiations only concerned how much.

One extraordinary example of how little publishers know or care about creators’ rights was revealed in a plea offered in defence of the oil company’s action. Their solicitor wrote that if his client had known that it was going to cost this amount, he would never had used the cartoons in the first place. Or as Simpson’s commented, “as bad as saying ‘Had I known I was going to be arrested I’d never have robbed the bank!’"

The terms of the settlement do not allow me to identify the oil company or disclose the sum. However I can reveal that the cheque I received, even with Simpson’s Solicitors hefty slice taken out, represented over ten times the fee I had received from the health authority for first rights to the fifteen original cartoons!

The ‘They Can’t Do This to Me’ approach

The fact that I had won my case showed that, like many publishers, my oil company was of the opportunistic, or amateur class of rippers-off. Simpson’s had only to tell them that I was able to prove that (a) the work in question was mine, and (b) I had created it at a time before they published it. They would then to suggest that they looked up their law books. Research into the cut-and-dried law of copyright would have disclosed that once the authorship and timing could be proved, a court case would have only resulted in a rubber-stamp decision for the plaintiff, with costs against the publisher.

Why then do so many copyright cases ever get to court?

The answer is that the mainstream publisher has more money than you. His lawyers are well practiced at having cases adjourned, appealing against decisions and generally delaying until the little bloke goes bankrupt. Remember, someone must find the court costs for every appearance, however abortive. Until the court finds in favour of the complainant, he’s the one who gets to pay the bills.

It looks like another case of ‘You can’t win against the big guys’. Once again, there’s a way out.

The same night as we met Shane Simpson, we were introduced to John Gian from the World Register of Copyrights. WROC was founded by a Melbourne solicitor who was a part-time musician. Himself a victim of musical malpractice, he worked out answers to the twin phrases that copyright plagiarists use to squelch creative small business people; "Prove it" and "Sue me!"

The Law which majestically prevents rich and poor alike from stealing bread and sleeping under bridges was no protection for the small complainant. The open-and-shut copyright case closes firmly when you do not have the cash to keep it in the courts.

It took John Gian’s boss a while to convince the world’s largest insurance company that any well prepared copyright case which went to court had to succeed, provided it was properly funded. Since persuading the company to underwrite the risk some three years ago, they have not needed to pay a single claim. “Sue me” was no longer a problem.

Every creative person who registers with WROC sends proof of their authorship with their claim. Writers send copies of manuscripts, musicians enclose a tape and lyrics, we cartoonists need only send a photocopy of the work. They are logged in a record indicating the date of registration, and stored in a security vault. "Prove it" is easy with all the evidence needed locked away in a Mayne Nickless strongroom.

Your work is sent to the publisher with a discreet sticker attached. It warns that if any attempt to pirate the works is considered, the starving artist has $50,000 to fight the case in court, courtesy of Lloyds of London. (This can be passed off gently to your publisher as being there to protect you ‘in case anyone else gets their hands on it.”)

The sticker acts a deterrent to most. If not, WROC will organise the necessary legal action. In the few cases where publishers have assumed it to be a bluff, none has ever made it to the court.

Of course, this kind of protection does not come cheap. Cover for a Ulm, for example, would cost $450.00 and a confidential report with a high espionage risk might rate a $11,000.00 premium.

The good news is that for AB&WAC members it costs $360.00 a year. There is no limit to the number of works submitted over the twelve months. A gag artist turning out 50 jokes a week protects an entire year’s output at about fourteen cents a gag.

And for those of you who do not take steps to protect yourselves, it is not good enough simply to say you deserve all you get. Consulting the Australia Council about a grant last month I got the distinct impression that cartooning is considered same kind of inferior art. Maybe that has something to do with our own attitudes and the value we place on our own work.

Every artist who discounts his work because ‘lt only took me five minutes’, lowers the rate for whoever follows him. In the same way, every time a publisher lifts a previously published work and gets away with it, two things happen. Not only does he deny the opportunity of doing an original cartoon to another cartoonist, he reinforces in his mind that pirating cartoons is an acceptable thing to do.

Oh, and if you think that none of this applies to you because you have never had any of your work ripped off, your turn comes round next week!

Cola Buchanan is a first year committee member of the AB&WAC. This is his first article for INKSPOT.

This is an excerpt from a past issue of InkSpot, the ACA’s quarterly magazine. To read current InkSpots, you’ll need to get a copy by joining the ACA, either as an Associate or Full Member.