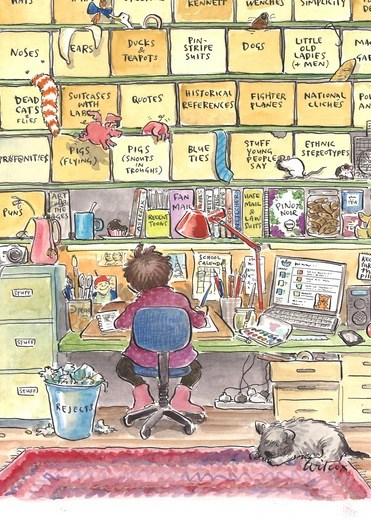 I’m honoured to be invited to say a few words tonight about the perils facing cartoonists, in the wake of the shocking Charlie Hebdo attack.

Do you have any idea how dangerous my job is?

Only last week, I drew a cartoon pondering the possible similarity of our ANZAC soldiers last century to the radicalised youths who go off to fight in Syria now. Outrage!

I was trolled on Twitter, called a muppet and worse! And I got an angry letter to the newspaper – “Dear Mr Wilcox, you should be ashamed!…”

But there’s worse. My colleague, Glen Le Lievre, as you may remember, was careless with his symbolism last year in a cartoon questioning the Israeli bombardment of Gaza. He was in turn bombarded with outraged letters by a very organised lobby, forced to apologise and to undertake re-education.

All that, however, is of course nothing in comparison with what our colleagues in less tolerant regimes must face. Here’s the situation for a few of them, according to the Cartoonists Rights Network International.

In Malaysia, cartoonist ZUNAR is charged with nine counts of sedition, largely for supporting Anwar Ibrahim and criticising the government. He faces 43 years in jail.

In Turkey, BAHADIR BARUTER and OZER AYDOGAN were found guilty of insulting President Erdogan. They were sentenced to jail, but eventually had their sentence commuted to a fine.

It’s a democracy after all.

In Iran, artist ATENA FARGHADANI is in jail for having “Insulted representatives of parliament by means of cartoons”, among other crimes. I’d better not go to Iran.

Cartoonist BONIL in Ecuador is on trial for a cartoon in which the subject he drew was black, so, racist.

Then in Indonesia, the editor of the Jakarta Post could be charged with blasphemy for a cartoon that suggested ISIS was holding the Muslim world to ransom.

In Venezuela, cartoonist RAYMA, whom I met last year, was recently sacked for criticising President Chavez. She’s often been in danger of her life and required guards to ensure her personal safety.

AKRAM RASLAN in Syria is “under investigation by the relevant authority” for offending the state’s prestige… He may or may not have been killed. His fate is unconfirmed.

And now we know what happened in France to cartoonists who refused to be told what they could and couldn’t draw.

We have it pretty good here. These freedoms, we largely take for granted, and yet we find ourselves arguing about what so-and-so “shouldn’t be allowed to get away with saying”. Or suggesting that somehow the Charlie Hebdo cartoonists “went too far”.

“No belief system, no faith and no ideology justify [these] gruesome murders…”