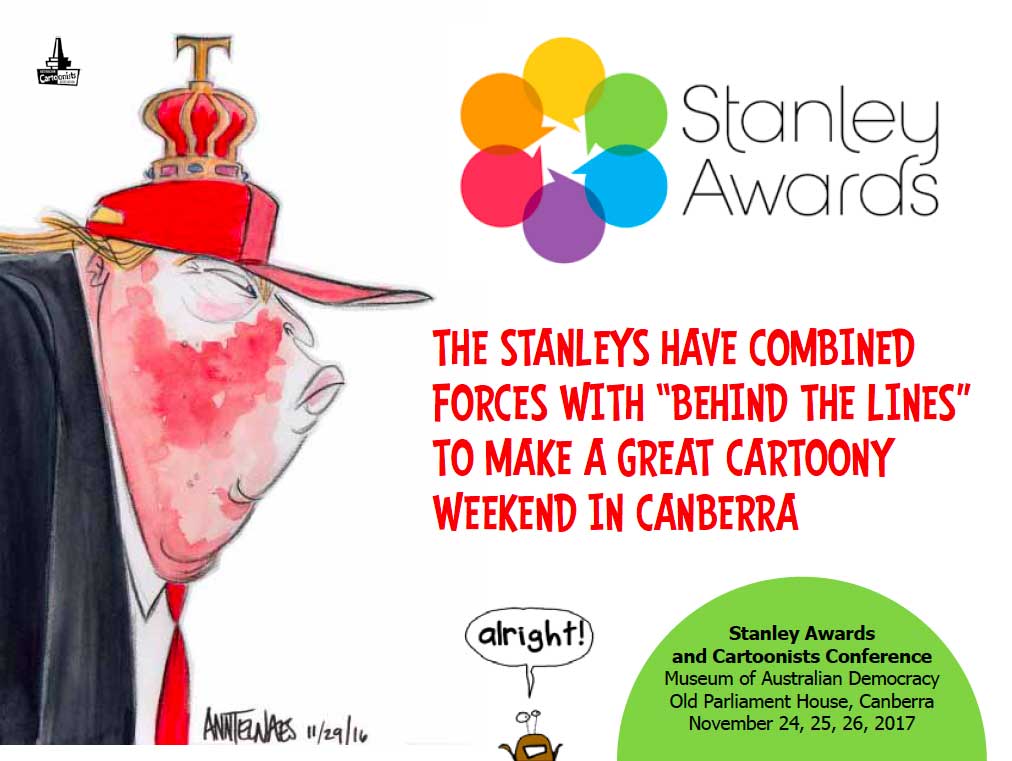 All aboard for the Stanleys weekend!

This year we’re going to do something a little different – Friday will see us hosting master classes with our special guests. From 9am til 12 noon renowned animator and university lecturer Nancy Beiman will talk all things animation and show us some of the tricks of the trade in a three hour spectacular class from one of the industry greats. She’ll discuss technique, technology and the fundamentals plus highlights of her career as she ably fills three wonderful hours.

Then from 1pm til 4pm we’ll have another masterclass with our second International guest! None other than Pulitzer Prize-winning and 2016 Reuben Cartoonist of the Year Ann Telnaes direct from Washington DC. Ex-animator and current political cartoonist for the Washington Post, Ann will walk us through a variety of techniques and tricks.

Each of these three hour masterclasses is purchased separately from our usual Conference package as we attract local and interested artists from outside the ACA. Priority will be given to ACA Members and seats will be limited.

Back to your room to freshen up because at 6pm we have the grand opening of the 2017 Behind The Lines Exhibition at Old Parliament House! A cavalcade of cartoonists and the plebiscite-voting public will converge to open the annual showcase of the year’s best political cartoons. There may even be a special surprise included!

At 8.30pm the grand opening will finish up and you’ll be free to catch up with your ACA mates in one of the numerous venues that the wonderful Canberra has to offer. Don’t stay out too late because bright and early tomorrow we have:

The ACA AGM from 9:00am! This annual catch-up of the affairs of the ACA is a good chance to air any viewpoints or suggestions you may have for the coming year. Grab a cup of whatever when it’s done because then from 10.10am we go straight into a brief talk with the creators of the Australian Comic Arts Festival, a fantastic young festival in Canberra dedicated to - you guessed it - comics.

10:30am sees us talking to Dr Brian Yecies and Dr Ae Gyung-Shim about webcomics. How they have developed, who does them and is it possible to make a living from them?

This promises to be a lively and informative discussion before we welcome 2016’s Cartoonist Of The Year Glen Le Lievre who will give us a fascinating talk about his career, his influences and his unmistakable style. And maybe that cartoon.

Okay, it’s 12:30pm and time for lunch and you’ll have an hour to wander off and gather nuts and berries from a number of suggested eateries within easy walking distance.

There’s also a café onsite at Old Parliament House that can cater to your hunger.

Back again at 1.30pm for a half hour discussion with our International guest, Ann Telnaes as she discusses her career and drawing that President. This will be fascinating and you won’t want to miss it!

2.00pm sees us taking our seats for a momentous panel discussion of the year’s politics hosted by our friend Mike Bowers (from Talking Pictures on Insiders) and featuring political cartoonists Glen Le Lievre, David Pope, Cathy Wilcox, Peter Broelman and Andrew Marlton (First Dog on the Moon). What a classic venue for this meeting of minds and pens!

Then to wrap up our day, the Screen Sound Archive presents the Australian premiere of a short animated film by International special guest Nancy Beiman.

Come 4.30pm we’ll wrap up and head back to our hotels to dress in our finery and attend the 6.30pm pre-dinner drinks of the 34th annual Stanley Awards from the sunny capital of the country, Canberra!

Who will bag the gongs? Who will take the coveted Cartoonist Of The Year? Who will fall asleep in their pudding? All will be revealed and probably more when the drum rolls roll and the envelopes are opened.

But wait! There’s more! Sunday morning from 10am join us in the heart of Canberra at Impact Comics where members can come along, sell their product and meet the adoring public at the annual Impact Comics Zine Fair!

Draw your beloved characters, caricatures of the public or just shake hands with the fans until the fair wraps after lunch and we can all go home to recover from one hell of a great weekend! See you there!